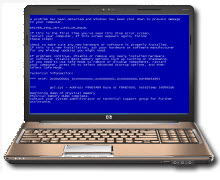 Satellite laptop Blue Screen repair is the process of fixing the infamous “Blue screen of Death” problem when a computer flashes a blue screen, then shuts downs without warning and reboots itself. In most cases this happens without warning and any unsaved files are lost, which is extremely frustrating to the user.
Satellite laptop blue screen repair is in greater demand as laptops become more complex and users place increasing demands on them. Almost everybody who has used a Windows-based computer has come across the infamous Blue Screen problem over the past few years

SOFTWARE – In most cases, the Blue Screen is due to errors in the small programmes on your Satellite laptop that run hardware (e.g. printer), often referred to as Drivers. This is particularly common when new hardware has been installed or drivers have been updated. There may also be problems with the Registry which will need professional attention by Blue Screen repair specialists.

HARDWARE – Another potential cause of a Blue Screen problem with your Satellite laptop is a fault with specific hardware such as a power supply malfunctioning or a component overheating, all of which can be fixed by a Blue Screen repair service
MEMORY (RAM) PROBLEMS such as a faulty memory card or memory card that has become dislodged from its fixings are another common source of Blue Screen problems with the Satellite laptop.